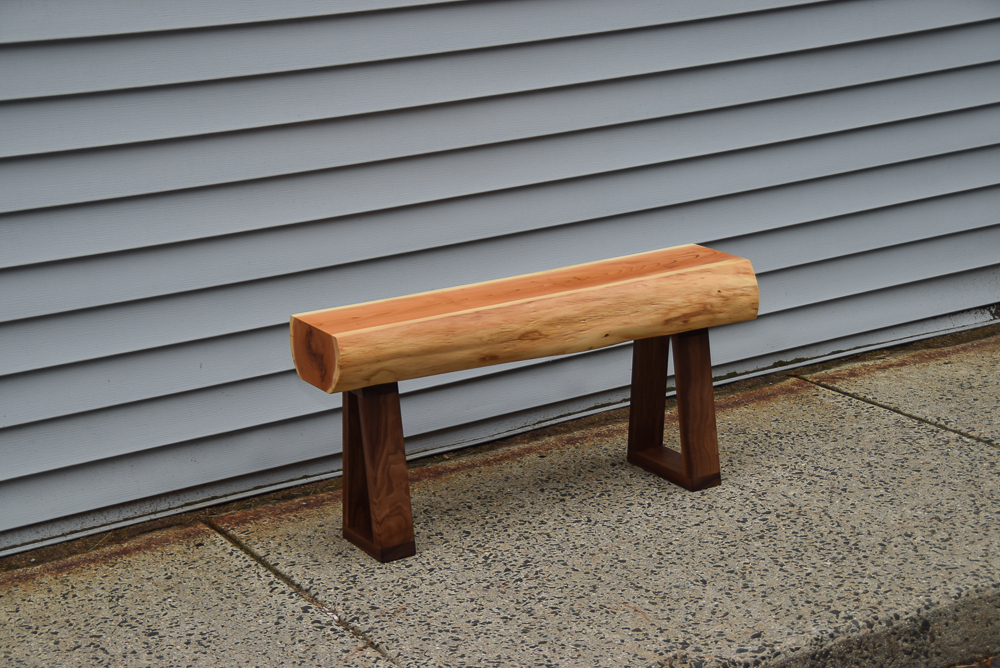 Yew Bench: A Marriage of Rustic and Modern Styles

This amazing contrast of colors will be the focal point of any entryway or home decor. The deep orangey-brown color of this live edge yew bench heartwood that is blanketed by the lighter band of sapwood is eye-catching enough yet is further enhanced by the rich color and character of the walnut legs supporting it.

This live edge yew log is a substantial 4 5/8″ thick with a sapwood band 1/2 – 7/8″ thick. I hand de-barked the yew log but kept a majority of its natural texture and marbled coloring intact. It is completely smooth to the touch.

The walnut base is constructed using beefy 3″ wide x 1 1/8″ thick stock. Individual legs are assembled using domino joinery in a 7-degree angle trapezoidal configuration. Outside vertical edges of the legs received a 3/8″ round over while all other edges were hand sanded to ease the edges. I drilled threaded holes into the yew top, using bolts to secure the two together.

Any cracks in the yew log received a tinted epoxy fill. The entire piece is finished with Rubio Monocoat pure oil – a durable, low-sheen oil/wax finish.

I’m not sure of the exact species of Yew – it could be Pacific yew or European yew – both have very similar grain, coloring, and overall characteristics.

Want to #StickerSwap with me?

Use the link below to save $10 on an order, then DM me on Instagram. @DESIGNABLECO